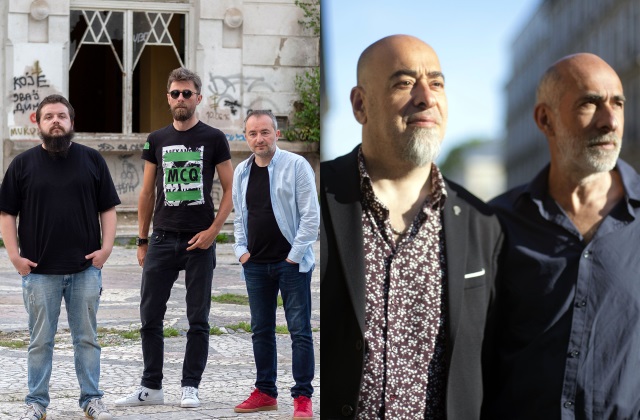 Saso Popovski is Macedonian jazz guitarist and composer who has performed on several jazz festivals in Europe like Roccella – Italy, Perto – Saint Petersburg, Nishville – Serbia, Petrovac – Montenegro and Budapest Jazz Club – Hungary. He has worked with many well-known jazz artists including Toni Kitanovski, Oscar Salas, Milcho Leviev, Dave Wilson and Goce Micanov. He is currently Head of Jazz department at the Goce Delchev University in Stip. In the last decade, Popovski has released five albums, many solo compositions, and also composed music for film and theatre. His current trio project is with Ivan Bejkov on double bass and Viktor Filipovski on drums, with whom he recorded the new album “Fallen Land” for SJF Records. The music of Saso Popovski is one of pure lines, concluded structures and lush imagination. Rhythmically and also melodically, his music alludes to oriental patterns, which makes it a bit mystical. He organizes his compositions around a beautifully derived, clear, appealing melodious lines. “Fallen Land” is an album in which we can find the best of the soul of the Balkans and Popovski finds a more central dimension that best highlights its compositional and executive skills. The rhythms and harmonic lines know no boundaries. Balkan jazz has a modern soul.

Who does not know the Belmondo brothers? Stéphane, the trumpeter, flamboyant heir to Chet Baker and Freddie Hubbard, one of the great lyricists of his instrument, and one of the most esteemed on this side of the Atlantic. Lionel, the saxophonist who brought together the music of Lili Boulanger and Yusef Lateef, who united the Coltranian spirit with French liturgical traditions. For more than a quarter of a century, these two exceptional musicians have led an impressive number of musical adventures, with the unconditional support of their group, which has always followed them in all their artistic explorations. Today, on the strength of their experience and faithful to their principles, the brothers give pride of place to the intrepid Belmondo Quintet by finding, on the piano, the magnificent Laurent Fichelson whose elegance we no longer have to praise. nor the soulful spirit. Belmondo brothers performed on all biggest jazz festivals in the world and won numerous prestigious prizes. Their discography is impressive, recordings with a long list of jazz greats, Dee Dee Bridgwater, Michel Legrand, Jacky Terrasson Yusef Lateef, Gil Evans, Stéphane Grappelli, as well with the great Brazilian singer, Milton Nascimento. Belmondo Quintet is a band in the form of all-stars, of flawless memory, of rare spiritual strength, jazz to the point of breath