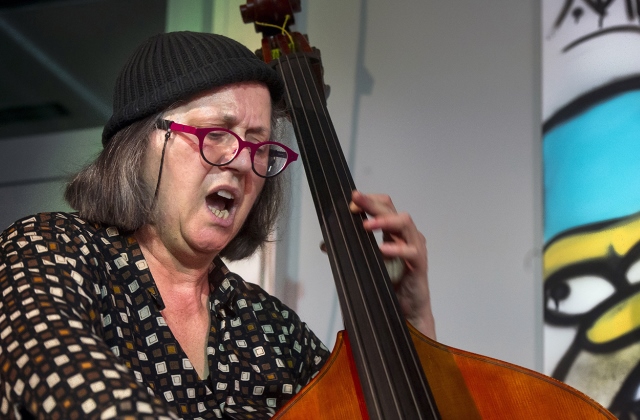 French double bass player, improviser and composer Joelle Leandre is one of the dominant figures of the new European music. Trained in orchestral as well as contemporary music, she has played with Ensemble L’Itinéraire, Ensemble 2E2M and Pierre Boulez’s Ensemble InterContemporain. Joelle Leandre has also worked with Merce Cunningham and with John Cage, who has composed especially for her – as have Scelsi, Fénelon, Hersant, Lacy, Campana, Jolas, Clementi and about 40 composers. As well as working in contemporary music, Leandre has played with some of the great names in jazz and improvisation, such as Derek Bailey, Anthony Braxton, George Lewis, Evan Parker, Irene Schweizer, William Parker, Barre Phillips, Pascal Contet, Steve Lacy, Lauren Newton, Peter Kowald, Urs Leimgruber, Mat Maneri, Roy Campbell, Fred Frith, John Zorn, Mark Naussef, Marilyn Crispell, India Cooke and so many others. She has written extensively for dance and theater, and has staged a number of multidisciplinary performances. In 2002, 2004 and 2006, she is visiting professor at Mills College, Oakland, CA, Chaire Darius Milhaud, for improvisation and composition. Her work as a composer and a performer, both in solo recitals and a part of ensembles, has put her under the lights of the most prestigious stages of Europe, the Americas and Asia.