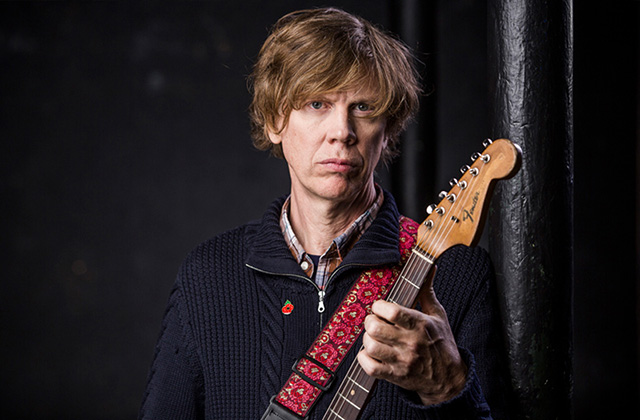 Thurston Moore moved to NYC at eighteen in 1976 to play punk. He started Sonic Youth in 1980. Since then Thurston Moore has been at the forefront of the alternative rock scene since that particular sobriquet was first used to signify any music that challenged and defied the mainstream standard. With Sonic Youth, Moore turned on an entire generation to the value of experimentation in rock n roll – from its inspiration on a nascent Nirvana, to Sonic Youth’s own Daydream Nation album being chosen by the US Library of Congress for historical preservation in the National Recording Registry in 2006. Thurston records and performs in a cavalcade of disciplines ranging from free improvisation to acoustic composition to black/white metal/noise disruption. He has worked with Yoko Ono, John Zorn, David Toop, Cecil Taylor, Faust, Glenn Branca and many others. Alongside his various activities in the musical world, he is involved with publishing and poetry, and teaches writing at Naropa University, Boulder CO, a school founded by Allen Ginsberg and Anne Waldman in 1974. Thurston also teaches music at The Rhythmic Music Conservatory (Rytmisk Musikkonservatorium) in Copenhagen. Presently he performs and records solo, with various ensembles and in his own band, The Thurston Moore Group.