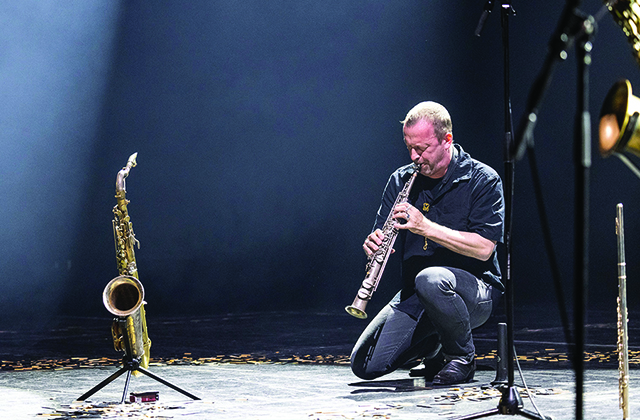 Mats Gustafsson is a Swedish reed player, improviser, composer and a stalwart on the Scandinavian free jazz scene. His extended saxophone techniques draw equally from the fiery free jazz blowing tradition and the European microtonal school. His hundreds of albums – either as a leader, in groups (Gush, Fire!, Fire Orchestra, Swedish Azz, The Thing), or his many collaborations – showcase an encyclopedic knowledge of jazz, blues, the vanguard classical tradition, folk and even popular song, as well as a curator’s gift for concept, while a canny feel for the idiosyncrasies of his musical partners has established his golden reputation as a highly sought-after collaborator.

Based in New York City, Linda May Han Oh is an acclaimed bassist – composer who has performed and recorded with artists such as Pat Metheny, Kenny Barron, Joe Lovano, Dave Douglas, Terri Lyne Carrington, Steve Wilson, Geri Allen, and Vijay Iyer. Born in Malaysia and raised in Perth, where she picked up the upright bass and studied solo transcriptions of Dave Holland. Her roots were in Australia but her real growth in New York. After more scholarships she moved to New York in 2008, where she completed her master’s degree at the Manhattan School of Music. In the same year she released her debut album “Entry”, with the trumpeter Ambrose Akinmusire and drummer Obed Calvaire.